On the 23rd March 2019, we are very proud to welcome Tyler Butterworth to the award winning Cinema Museum to present his one man show about his father, the much loved and missed comedy actor Peter Butterworth.

The evening will be introduced by Misty Moon’s El Presidente Robin Askwith and the Q&A after the show will be hosted by our resident MC Linda Regan.

The poster was designed by Sam Bessant and will be available on the night in a limited edition run of 20 signed by Tyler, Robin, Linda and Sam.

On Saturday the 8th December we are holding the last Misty Moon gig of 2018 at the award winning Cinema Museum in Kennington. An Evening With Martine Beswick, with a special screening of Doctor Jekyll and Sister Hyde before the main event.

This exclusive painting has been designed to celebrate the event by the celebrated artist Graham Humphreys. Graham has printed a limited run of 30 A3 copies of the print that will be signed by both himself and Martine and available on the night. 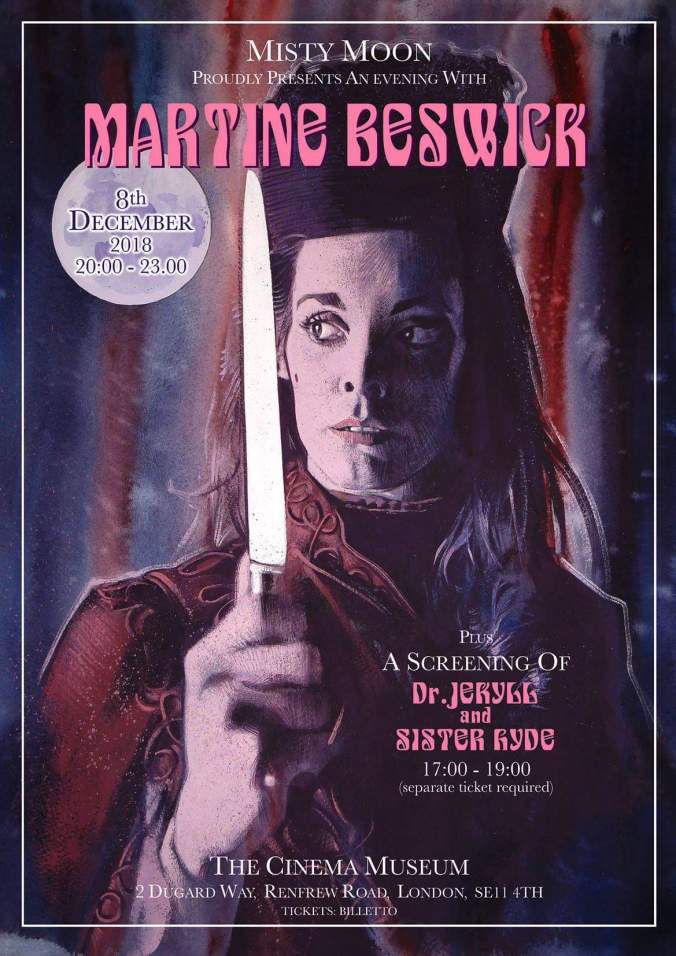 The Misty Moon International Film Festival is back again this Halloween, for another year of fantastic indie films and will be held on Saturday the 27th October at London’s ‘The Cinema Museum’, a venue of significant cultural importance within England’s capital city.

We are looking for short films of all genres to be submitted but as it is near Halloween and our judges are made up of actors and actresses from well know horror films we would appreciate a smattering of short horrors as well.

To submit a film: https://filmfreeway.com/MistyMoonInternationalFilmFestival

Misty Moon is honored to produce a gig with one of Britain’s best loved actors Ian Ogilvy.  An Evening With Ian Ogilvy will be at The Cinema Museum on Saturday the 7th April 2018. Ian will be joined on stage by Misty Moon’s MC Linda Regan for an in depth Q&A. After the Q&A Ian will meet the audience and take part in a paid signing. Tickets are extremely limited for this unique and rare event and can be brought in advance from https://billetto.co.uk/e/misty-moon-presents-an-evening-with-ian-ogilvy-tickets-261244

For a generation of television audiences, Ian Ogilvy is The Saint.
Born in 1943, to theatrical parents – and with relatives who were
active in the Intelligence Services during World War II – he had a privileged
and occasionally odd childhood.
After attending RADA in the early 1960‘s, he went on to play leading
roles in countless television programs, including iconic series like I,
Claudius, and Upstairs Downstairs. Others (and they really are too
numerous to mention) include Miss Marple, Tom Dick & Harriet, Murder
She Wrote, Murphy Brown, Caroline In The City, Diagnosis Murder and
Early Edition. He played leading roles in London’s West End, in such plays
as Design For Living, Three Sisters, Happy Family, The Common Pursuit,
Rookery Nook, The Waltz Of The Toreadors, The Millionairess, Sleuth, Stage
Struck and Run For Your Wife. In Los Angeles, he has appeared in Sleuth,
Present Laughter, My Fair Lady and Love! Valour! Compassion! His many
films include Death Becomes Her (with Meryl Streep and Goldie Hawn),
Witchfinder General, Wuthering Heights, Waterloo, The Sorcerers, We Still
Kill The Old Way, We Still Steal The Old Way and others. He has a TV Times
Award, three Los Angeles Dramalogue Awards, a Los Angeles Times Critics’
Circle Award and was nominated for an Ovation Award.
Ian has written two novels – Loose Chippings and The Polkerton
Giant . He has also published a play, A Slight Hangover. His latest venture is
writing children’s books. Measle And The Wrathmonk, Measle And The
Dragodon, Measle And The Mallockee, Measle And The Slitherghoul and
Measle And The Doompit have been translated into about 15 languages and
are published all over the world.
Ian’s autobiography – Once A Saint – was published last year. The
Daily Mail called it, “A wickedly entertaining new memoir.”

Calling all Film makers, actors, directors, producers and writers, submissions are now open for this year’s Misty Moon International Film Festival. The festival’s Final will be held at the prestigious Cinema Museum on Saturday the 28th October and will be judged by our panel of celebrity guest judges.

Judges announced so far are Lynn Lowry, Emma Dark, Gary Shail and Nicholas Ball, more judges to be announced over the coming weeks. The festival will be hosted by David Barry and Misty Moon’s Curator Stuart Morriss.

There will be 2 winners “The Audience Choice” and “The Judge’s Choice”. Please click the link below to view submission details and GOOD LUCK.

This year’s winner at The Misty Moon International Film Festival is “Cowboy Ben” directed by Jon Shaikh and Scott Rawsthorne. “Cowboy Ben” is a dark comedy – Ben, a man on the edge, meets a childhood friend in a trendy London bar, but with nothing to lose, it soon becomes clear he has a dark vendetta against the people he blames for his failings.

Watch the film in full by clicking the link:

The season of mists and mellow fruitfulness has always been The Misty Moon Film Society’s favourite time of year. It is our birthday, we will be 8 years old on Halloween. This year we are celebrating with the return of The Misty Moon International Film Festival on Saturday the 29th October at The Cinema Museum.

We have classic film screenings throughout the day including a FREE screening of “Before Dawn” with a Q&A with the director Dominic Brunt.  In the evening the main film festival starts at 7pm with 10 ghoulishly delightful films, all being judged by the best in the business and you the audience choose the winner. The event is FREE and for more details go to http://www.cinemamuseum.org.uk/2016/the-misty-moon-international-film-festival/#more-19188

The Misty Moon International Film Festival is back on Saturday the 29th October 2016.  Set in the atmospheric Cinema Museum in London, with special guest judges this is one festival you do not want to miss.  Open to all genres, you can submit your films by clicking the link below:

Here is a promotional video recorded by Henry D.C. Williams at the first The Misty Moon International Film Festival Halloween 2012

Normally The Misty Moon Film Society would introduce a new Honorary Patron on Halloween as part of our birthday celebrations but this year is a little different.

Emma will also be one of the Scream Queen Judges at this year’s Misty Moon International Film Festival at The Cinema Museum in October.